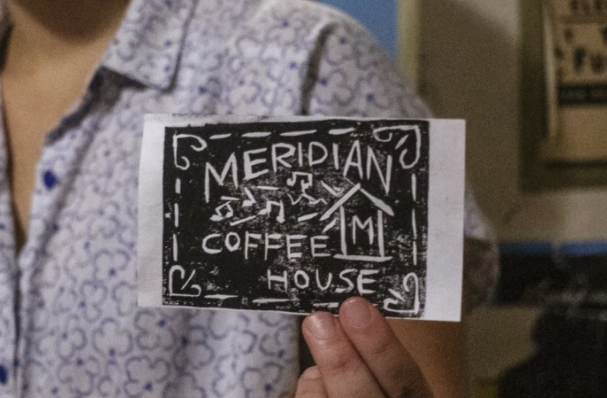 Situated just outside of Colonial Williamsburg, the unassuming Meridian Coffeehouse hosts a wide range of music and art events and serves as a hotspot for DIY culture here in America’s Historic Triangle. Owned by the school and operated by students, The Meridian seeks to provide students with a space to truly be themselves. To learn more about how The Meridian approaches its goals, style team member Anna Kashmanian sat down with Faith Burke and Mia Naples — The Meridian’s general managers — to hear their experiences and perspectives running this historic arts venue.

AK: How would you describe what the Meridian is to someone who has never heard of it?

FB: The technical term people use is a DIY arts space. But I like to think it’s essentially a house owned by the school but operated by students for the purpose of a creative art community center. So music, art, poetry writing, anything along those lines – you can do it in the Meridian.

MN: I think a lot of people mostly know us from doing music on the weekends, but not a lot of people know that we also do stuff during the week. Students have their own shifts and can do basically whatever they want – sometimes it’s just doing homework and chilling out, a lot of people need a space to do that that isn’t swem or their dorms. People also do really cool stuff with [their shifts], like I think my favorite shift is arts and witchcraft, which is on Wednesdays at 7. They’re doing something really cool and they usually get people who haven’t been at the Meridian before. It’s good stuff and a lot of people don’t know that we do it.

AK: What made you two want to get involved with The Meridian?

FB: I think for me, I was just coming into my freshman year, had kind of no idea what was going on, and then this was just like, so aggressively unusual. Like, it’s just like, everytime people come they’re like “what is going on,” because it’s this random house in the middle of Colonial Williamsburg that is then this bizzare arts space that has so much weird history and so many opportunities to be totally self made and do whatever you want with it. But I think what kept me here was how genuinely lovely all the people were. And it was very rare for me coming from a high school where I didn’t feel that loved and accepted that people were just like there to immediately be like “we want to hear your voice, everybody has a say, and we want to love you for who you are, whoever that may be.”

“we want to hear your voice, everybody has a say, and we want to love you for who you are, whoever that may be.”

MN:  I wasn’t very sure what I was getting into, but I came and I think I came by myself and [there] just was [an] immediate wall of good energy. Which sounds really cheesy, but again everyone was there just be be present and like make music whether it was good or bad. And because Talk to Plants did ‘The Gift,’ which isn’t even a song, it was someone reading a short story and like noise in the background. That was when I was like “Oh my god, this is it! This is the thing I’m supposed to be a part of.”

AK: So as you mentioned, DIY music venues are typically associated underground music independence from mainstream media, and accessibility. The Meridian easily fits this definition, and for many people on campus, represents what DIY culture is. What do you think the Meridian contributes to campus life and why is that so valuable?

FB: I think we have a lot of hope for what it contributes, and we want it to be a place where people come and share their voice and be themselves. I think it definitely opens up a lot of opportunity for those who may not feel they have a space on campus, whether that be the type of music they play, how they’re perceived, or sometimes it’s just competitive to get involved in AMP or things like that. Or maybe what they perform doesn’t quite fit into the mold of the general school activities, or maybe would be looked down upon in some way. We try to create a space for that.